Since we were in Orlando this weekend, I just had to stop by the Lululemon outlet (this has definitely become my exercise clothese brand of choice!). I think it may just be the only outlet they have in the entire country (ok ok, maybe they have two). Regardless, I scored some serious items! I'm loving their products so much these days. For yoga and running, the quality of the fabric simply cannot be beat! The running materials are so light that tissue paper may just be heavier...and the yoga materials are so stretchy that it combines all-over compression and stretch perfectly.

So, what did I indulge in? I'll tell you if you promise not to tell my husband. He saw the bag, and just said "I don't want to know how much, right?" ...so you see, I can't tell him now since I promised :)

Three capris! One was a heathered off-white basic "Wonder Under" gym crop capri which I just had to get because I never see any colors other than grey and black. See, its a necessity, right? I also purchased the "Its a Cinch Crop" which was basic black on the bottom with a teal super-wide waist band that cinches up with two little drawstrings above each hip. I saw this in the catalog and wanted it then, so I indulged. I also got the "Aero Crop" which is just really cool. Its a dark grey, but it was a 3-d feel to it with yoga-inspired design all over the bottome 3rd of the legs that are "grippy" texture...which also cover the knee. Is suppose its not only really cool, but also I justified it because it will allow me not to slip when doing anything on my knees :)

I also picked up a "The Bust Stops here' sports bras. These were similar in construction to the Moving Comfort Fiona. I really wanted a "Ta Ta Tamer" but alas they had none in the store.

I also picked up a hat and a visor...I simply couldn't pass up the $5 price, even if I typically don't wear hats. But, given these two, I may just have to start! :)

Last but not least...I picked up two tops. The "Scoop Neck Tank" is absolutely cut 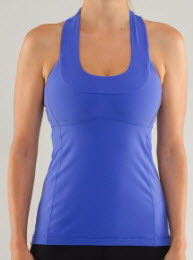 e. Seriously, just look at that picture...love it! Its designed for yoga, and has a fairly high cut in the front, but more of a racerback in the back, and I swear I could wear this out and about and even dress it up...loved it in the lavender. I also grabbed the "Dignity Halter" in black....I could easily wear this with jeans as its quite a low-cut, but still somewhat simple...and at $9 it was a steal.

Yes, I should hold my head in shame...but what surprised me most about this visit is the sizing. I know the size 8 bottoms fit great for me, but Lululemon's size 6 are a squeeze. I do have one running skirt in size 6, and its not comfortable enough for me to wear. But, regardless, all the bottoms I purchased were size 6. They were tight, but I'm determined to get to this size within the next few months. Tops purchased were all size 8s...the girls will never fit a size 6, which is more than ok for me. The tops were a tad tight as well, but once I get rid of my back fat, I should be good :)

No running skirts in the store, which was disappointing, but then again, I'm well stocked there. I did think it was strange to see the store arranged by size, rather than item. So, all of the size 6s were together, and all of the size 8s were together and so forth. I don't think they sold anything smaller than a size 2, or larger than a size 10. A smaller mens section was also available. And, no yoga mats were there for sale. I would have liked to check out "The Mat" as I really think I need a thicker one...I'm so tired of folding mine for some exercises.

So, it was a splurge, but its the only store I ventured into! And I love everything I got. We'll go back in January (for husband's baseball tournament at ESPN Wide World of Sports) or February (Princess Half Marathon) I think...and maybe we'll see what they have available :)

I'm Nanette, 43, and still consider myself to be a new runner...a little late to become an athlete, right? But, I want to be a great role model for my children (Ella 6 and Zoran 4) and their health and fitness is extremely important to me...so no more excuses! Follow me on my journey of my first athletic pursuit: running!