The plan was to leave the room by 3am to join my closest 19,000 friends on this balmy morning. My running partner was up at 2:15 getting prepped....she thought I was up since our bathroom light was on....was not happening. My phone alarm didnt go off!!!! So, at 3:05, she nudges me awake. I promise I'd be ready in 5 minutes...and I kept that. We were 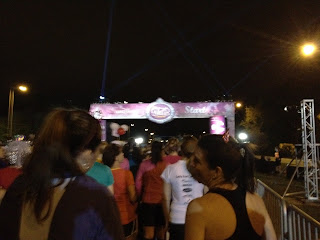 out the door in exactly 5 minutes! Now, I'm glad that I laid everything out the night before in the bathroom....and it was very smart of me to go to bed before the kids (I laid down at 7:30, and with the kid noise, I was asleep before 8:15).

The drive to Epcot was fine...there was a slight detour to our planned route due to some construction, but we still ended up parked at ready to go by 4am. Really, it was easy! I'm not sure what all the hype was about stressing that there was a parking lot on the roads due to this event. Seriously, Disney has car management covered to a T, in every day park events and these types of events. 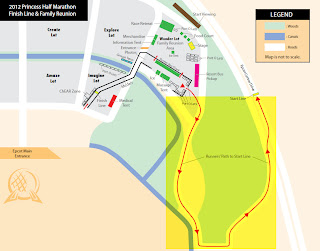 We affix our bibs and do a final swipe of body glide in those precious places while parked in the car and then just looked at each....might as well walk over to the staging area. The place was packed. Concession stand, champagne booth (which opened after the race ended), race retreat amenities (may have to look into this next time), bandstand, etc...nothing really spectacular, so we sat at a picnic table near the concession area and waited and just people-watched for a bit. Right around 4:30, we decided to walk the 20 minute walk to the corrals. (The walk is highlighted in yellow in the adjacent picture) After all, we were told that if we were not in our corrals at 5am, there is a chance that they would disallow us entry! Now, I did doubt this, but it is possible that they would have told us to go to a back corral. We did get lucky by getting the A corral (which is beneficial simply for the time insurance that it offers) and we were not going to blow it!
The walk was ok....you were in the middle of a herd. There were tons of porta-potties in the staging area, but there were a ton on the walk to the corrals as well...better to go potty here than in the staging area. When we got to the corrals, E-H were first, and then you walked around E-H to get to A-D. Of course, A was the last corral...made sense. And while some people complain about the long walk, I thought it was perfectly fine. Sure, I brought my mylar wrap from the RNR Half to keep me warm...but its good to get a nice walk in before a long run....perfect warm up opportunity! 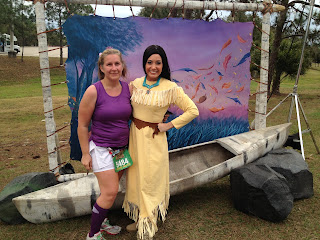 We get to Corral A (they were checking tags) and enter....I start to glare around and see all of these true runners. Svelte and athletic. Maybe they were not all perfect (like us) but there were clearly no walkers in our midst. Now, once you are in a corral, you cannot leave. So, imagine this...to our left are the other corrals....in front of us is the starting line...to our right are some trailers/RVs and right behind them were some woods. Yep, you guessed it...tons of ladies were jumping under the corral gates (like the plastic wind/snow barriers put up to contain snow drift up north) and going 5 feet into the woods to pee. It was so dark that you really didnt see anyone's privates, even though you knew people were 10 feet away :) Yes, that was a first (as an adult) for me...peeing in the woods.
After a few announcements and mindless chatter by the MC, there were some introductions of some people, eg Jeff Galloway, Miss America. The wheelchair races started...I didn't even know there were wheelchair races (and I have the utmost respect for them on those darn overpasses...more on that to come!). 5 minutes later, it was our turn. The fireworks went off and there we are...running in the dark.
I must say, as soon we left the starting line...a man called from the sideline. Now, imagine each corral has about 2,000 runners in it. He yelled out "Have you seen my wife?" Of course its pitch black, and provided quite the chuckle among the runners.
Disney provided light quite often in the form of floodlights every 1/4 or so near the start. Our plan was to run the first 5 miles straight to Magic Kingdom and forego any photo ops simply because the lack of light wouldn't make them worthwhile. I'm glad we held up to this...even those photo ops that looked promising early on were longer lines, and by the way they were arranged, I thought for sure that they would be on our return. More on that as well. 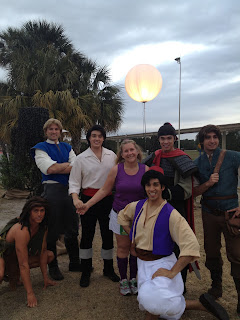 The first 5 miles was pretty desolate, but there were some marching bands, characters, stilt people, etc to keep you entertained. When you round the corner and see the Magic Kingdom, you quickly realize that the halfway point is close...so you promise yourself a ton of photos here. There are characters all over and some of the lines were only 2-3 people. Disney did a great job with these. While they had the official race photographer (eg to order later online for a fee) at each stop, they were quick to use your camera. In fact, most photo ops had one official photographer and two staff to handle your cameras. So, while person A was getting their picture by staff A, staff B already had your camera and was waiting for you to move into place for a pic. Really, it was quick. Even the longer lines were quite manageable....after all, their goal is to get you off and running FAST! They did that quite well. 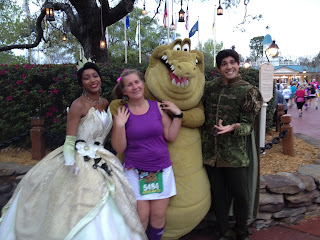 Each drink station was extremely well-manned. I believe each was about 8-10 tables on both sides of the road (so maybe 16 tables all fully prepped). The first half were powerade, and then the next were water. Great layout. They were more than plentiful on the course as well. Absolutely no reason to ever bring water on your belt.
Once you leave Magic Kingdom, right around mile marker 8, you realize you are almost done...and yet those dreaded overpasses are coming....3 of them, to be exact. That...was....tiring! Totally doable, but tiring. We ran pretty much nonstop (except for the photo ops the first 8 miles), but decided to switch to intervals the last 5 miles. I hadn't ever really done this for a race before, but since I wasn't really going for time and I really was still hesitant about my foot (after all, maybe since my whole entire body was sore right now, maybe I simply couldn't feel the pain in my foot enough to determine if there was more damage?)..so intervals it was! Truth be told, I had only run 4 miles since the last half 2 weeks ago because of my foot, and a few days without running really tricks your body into forgetting somehow. 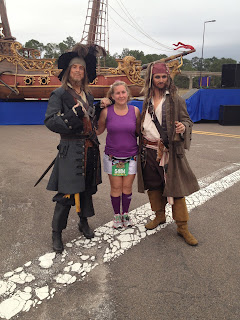 Right around mile marker 7/8, there was a Cliff tent....full of Gu, but no chomps or chews. Disappointing, but hey, I grabbed a few to try later. I do wish there was a water station right after the Cliff station. If you only have Gu, you need to drink right afterwards to get that stuff down!
I realized this with the RNR Half as well...but when you stop and you have already covered 9-10 miles, every time you start to run again...well, lets just say that those first 5-10 steps are incredibly difficult. You need to find your groove again, but your body is fighting it. Each time you start to run, it feels as if your body is 300 pounds. Every jiggle is manifested into dead weight. True, after 10 feet, you find your stride again and recover, but it is still painful. So, the intervals were not so happy for me, but then again, maybe running straight wouldn't have been either! Regardless, I felt stronger than the RNR Half at this point. Not sure if it was the photo op breaks or the fact that my foot wasn't throbbing! Right at the 10 miler mark at the RNR is when my foot hurt and that last 5k was difficult. I had a mental image of me NEEDING to pass that mile marker 10 and feel ok. I was very glad when that occurred, as the rest was going to happen without issue then. 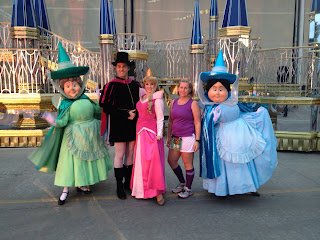 The overpasses...well, let me just say that these are what us Floridians refer to as "hills and mountains" ...that, and bridges. I've been training on bridges once a week for quite some time, so I felt confident with them...but the damn camber was hard on my feet. I ended up running in the grass 2' outside the road for a large part of those, when possible. The level ground really put less strain on my feet/ankles. I know that I was told about these cambers, so I'm glad I recognized it before it caused injury.
We stopped at the next medical tent for some bio-freeze. It was nice weather right now, but slathering that on your legs really gives you a boost! It couldn't hurt, so I put it all over my legs and knees. It felt like running through a sprinkler! Very welcome at this point, especially since we had one more overpass to go. 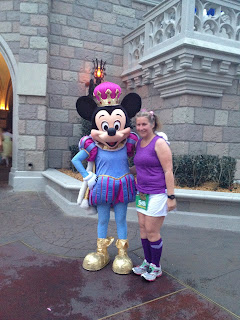 After the final overpass we were entering the backlot of Epcot. The cast members were ready for their day at the park, but they were all there cheering us on. We rounded Epcot and made our way back to the Wonder Parking lot and there were thousands of people watching us come in. We finished strong, and donned our medals. 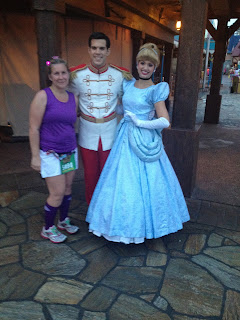 Walking to the food area, we grabbed bananas, tons of luna protein bars (these are tasty by the way), some gummy bears (for the kids, not me) and a box of snacks provided (hummus and chips, roasted soy beans, dark chocolate, etc). I liked the food options for sure. I also grabbed 2 waters and a powerade.
We sat down (I know you shouldn't, but I couldn't help it). I text Joe and tell him where to find us....they show up within 5 minutes. The kids are so proud. Love it! They want to store my medal for me. Not going to happen...I earned it after all! But, I did let them rotate wearing it all day.
So, my garmin didn't include my stops and totaled 2:27:48. Official disney time was 2:53:27. I wasn't going for a PR and just wanted to enjoy it and not injure myself any more, and I did just that! Will I do this race again? I think so! You definitely need to go into it without a "race" mentality, and if so, you will have fun!
As for the tracker results....Disney emailed my husband at each major interval....

Its easy to tell where we made stops! Overall, it was helpful for him to gauge when we would finish. He was charged with the care of 3 kids and getting them all to the finish line, so kudos to him!
And by the way, the weather held out...not a single raindrop until we were nearing the finish line...and even then, it was nothing! The running gods were there for us!

Other Princess posts that may be of interest include:

I'm Nanette, 43, and still consider myself to be a new runner...a little late to become an athlete, right? But, I want to be a great role model for my children (Ella 6 and Zoran 4) and their health and fitness is extremely important to me...so no more excuses! Follow me on my journey of my first athletic pursuit: running!